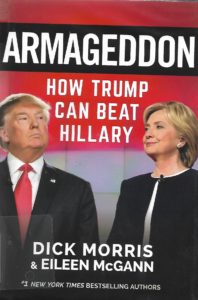 As I was driving home and listening to the radio after returning from a business trip, I heard Dick Morris advertising his new book, Armageddon How Trump Can Beat Hillary. He talked about his experience as an aide to the Clintons. Sounds interesting, I thought. When I got home, I immediately reserved a copy at the library. The book was still on order and there were enough copies available for me to receive one as soon as the books arrived. A few days later, my wife Elizabeth told me she had reserved a copy and asked me if I had heard about the book. She wasn’t surprised when she I told her I had also reserved a copy. She ended up cancelling her copy and reserving an audio book instead.

As I read the book, I noticed how current it seemed to be. It almost seemed like Morris wrote the book a few weeks ago and rushed the book to print. There was one point that was a little out of date that fascinated that me. Morris talked about the assertion that Hillary founded ISIS. Remember Trump saying that? Remember all the heat the press gave him for saying it? The book was written before Trump made the assertion. Rudolph Giuliani said Clinton founded ISIS before Trump did.

The first half of the book covered the common-knowledge Clinton scandals. I was disappointed that he didn’t write about the things he would have learned as a Clinton insider. As I read the book I found myself nodding my head in agreement thinking why would anyone want to vote for Clinton. Then it occurred to me, Morris was preaching to the choir. Hillary supporters already know she’s a crook, an untrustworthy liar, and a corrupt politician who’s been involved in numerous scandals. Hillary supporters don’t care and they’re not going to read Morris’ book.

A large part of the book is focused on suggestions about what Trump needs to do to beat Hillary. Most of the advice is for Trump to point out that Hillary is not working in the best interests of her supporters. Trump seems to be heeding the advice almost to the point of using Armageddon as his playbook. Trump is driving the points suggested by Morris and the media reports on the assertions almost every day. The media is attempting to report Trump’s statements as a negative, even as Trump moves up in the polls. Hillary supporters may refuse to read the book, but they can’t avoid the daily media reports about Trump convincingly telling voters how Hillary is not acting in the best interests of her supporters.

The book explains why Trump is right about renegotiating trade deals and why the Clinton deals are bad for unions and the Clinton base. Clinton support for teacher unions is bad for minorities, and why the Iran deals are bad for the security of America. Clinton had her fingers in all of these. Trump is following the playbook and his relentless hounding of Clinton is resulting in Clinton flip-flopping on many of her core issues.