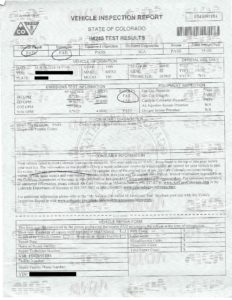 Colorado emissions testing is an unnecessary burden and expense forced upon the people by a corrupt and oppressive government. In the Denver, Colorado area, vehicles are required to be inspected every two years before they can be registered. Welfare and food stamp recipients are required to have their cars tested but most of them can register their vehicles without passing the emissions test. People who work for a living are required to either bring their cars into compliance or spend at least on $715 repair bills.

The emissions racket does have a drive-by program. If a vehicle drives by two different mobile roadside testing locations and pass, the owner will receive a notice on their registration renewal that they do not need to bring their car into a brick-and-mortar testing facility. They will still need to pay the $25 extortion fee.

Two years ago, I worked in affluent Boulder. On my way to work I would regularly pass roadside testing sites. My renewal said “Emissions Test Not Required“ but I still had to pony up the $25 shakedown. I later switched to a new job that was in an area only slightly less affluent than Boulder. No roadside tests on the way to work. When I took my car to the testing facility, the tester tested my car then immediately demanded the $25 fee, scribbled on the form, then finally handed me the marred form and informed me that my car had failed. When the tester started writing on the form, I immediately knew my car had failed the test even before he informed me of the results.

That was my second vehicle that had failed over a period of only a few months. After the first vehicle failed, I took it to our regular mechanic. He told me the car failed because the engine was worn out. My options were to rebuild the engine or to register in a county that did not require the test. I live only two blocks inside the testing area. Two blocks further out, I’d be in Park County and would have been able to avoid this testing nonsense. There was one other option. A new O2 sensor might help but it was a longshot, no guarantees. After picking up the car, our mechanic proclaimed the car would pass. “Guaranteed!”. It didn’t. The mechanic was not sympathetic or helpful when we told them it failed. If we wanted them to look at it again, they would charge us $100 for additional diagnosis. Up until that time we were good customers, the mechanic provided us good service and treaded us more than fairly.

As you may have noticed I do not have a high opinion of the emissions testing program.   Air Care Colorado does offer a service which I do have a high opinion of. If a vehicle fails twice, Air Care Colorado will provide a diagnosis and make recommendations at no charge. When we took our first car in, they told us if there was no warning light for the O2 sensor replacement was a waste of money. The problem was a bad catalytic converter. They recommended we replace our converter with a California catalytic converter. When we found a new mechanic, we insisted he install a California converter. He complied with our wishes and replaced the converter per the recommendation. The car passed.

After our Mercedes failed the first time, I took the car to our new mechanic. We discussed options and mutually decided the best course of action would be to replace the spark plugs. He told us we had the wrong kind of spark plugs for our vehicle, replaced the plugs and told us the car seemed to run better. I didn’t necessarily expect the car to pass the second time around, but I hoped it would at least get closer to passing. I watched the monitor as the vehicle was being tested. “Second chance test”. That didn’t sound good. In Colorado, after a fail, the second test is “free”. Is the monitor saying this was my second, “free” test, or did it mean the car had already failed and it was testing again just to make sure?

Since there was no charge for the second test, the tester didn’t demand I pony up before informing me of the results. Even before printing the form she said “I don’t think you passed”. Then she printed the form, scribbled on it, then told me I had a lousy mechanic. The car failed worse than it did the first time. My new mechanic had no idea about what do next. “Take it to another mechanic for an estimate, let them determine what needs to be done, then bring it back to me” he said.

I had good experience with Air Care’s diagnosis of the first vehicle so I took the Mercedes in for the no-cost analysis. Different analyst, different recommendation. I have a bad O2 sensor Justin said. I asked “but there was no dash light”, he said he tested it and regardless of the light, the sensor was bad. Justin then spent time with me explained in detail why the bad sensor was causing the car to fail. I asked him about other things I can do to get a better chance of passing. He patiently and professionally answered all my questions. I asked him if changing the fuel would help.

“Higher alcohol in the fuel?”

“Don’t do that. It won’t help and may cause damage”

So I followed Justin’s recommendation and paid a different mechanic to replace the O2 Sensor. The car passed.

I still believe the emission testing program is a racket and a scam. Emissions testing is an infringement on the people’s rights by a tyrannical government. I resent being forced to take in my car for testing and then stressing over whether or not my car will pass. But there is one high point in the program. I have a high regard for the technicians who performed the diagnosis and analysis and made recommendations about what we needed to do to get our vehicles to pass. My regular mechanics couldn’t figure out the problems. The Air Care technicians were able to determine exactly what I needed to do to pass the damn test.