What Happened: A Review 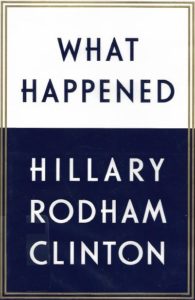 “I can carry around my bitterness forever or I can open my heart once more to love and kindness. That’s the path I chose” This is a quote near the end of Clinton’s new book, What Happened. As I was reading her book, I came to an entirely different opinion. Reading her book through the lens of an unapologetic Trump voter I had already decided this book was written by a bitter old woman.

Hillary blames Comey’s announcement about her emails delivered 11 days before the election as the primary reason for her defeat. Surprisingly, she also blames unfair treatment in the press as one of the reasons for her defeat. The Trump people continually complain about the anti-Trump, pro-Hillary coverage. Before reading her book, it never occurred to me that Hillary also thought the coverage was unfair. I wonder what she would have thought about the press if she had won. Finally, she blamed the Russians. So both sides complained about unfair treatment in the press, and both sides complained about the Russians working to defeat them. Hillary’s book fell short of accusing the Russians of actually hacking the election, but she made it clear that she thought the Russians could have hacked the election.

Clinton mentioned she regretted using the term “basket of deplorables” while repeating her belief that Trump supporters really are deplorable people.

Hillary ridiculed Trump for accusing Obama of tapping his phones even though it was later proven Obama really did tap Trump’s phones.

I don’t think it had much to do with the election but she did enter into a diatribe about cops killing blacks. Even when the shootings were legally justified, cops killing blacks is a major problem. She did concede some cops are good, especially the Secret Service officers that protect her.

She also wrote about disarming Americans. She used anti 2nd amendment rhetoric such as “commonsense gun control”, “gun safety”, and “gun violence”. She repeated that she doesn’t want to take guns away from the people while advocating for laws that would make firearms unavailable and deprive people of their gun rights without due process.

Hillary believed the presidency was owed to her because, well because she’s Hillary and because she’s a woman. She denied it in her book, but after reading the book I concluded she is a bitter old woman. Clinton knows she lost but can not came to terms with why she lost.

Hillary Clinton wrote that Trump’s ideas for change were entirely different from her own.  She said for Trump, change meant “handing a lit match to a pyromaniac”. When I read that, I laughed out loud. I enjoyed that passage. Her metaphor explains why she lost. Only she failed to recognize it.  For me, that was the best part of the entire book.

In my opinion, during the 2016 election the electorate wanted drastic change. The Democratic and Republican establishment failed to understand that. Hillary didn’t understand it either. The establishment from both sides are still bitter about the way the election turned out. Now that the people have handed a lit match to a pyromaniac, only time will tell if that’s a good thing or a bad thing.