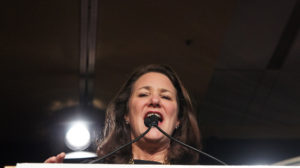 By using the term “gun safety”, she’s depending  on an uniformed population that’ll permit her to sneak in her disarmament agenda.  I for one know she’s using the frog in the pot of water approach.  Throw a frog in a boiling pot of water and he’ll jump right out. Put him in cool water and turn the heat up slowly and he’s cooked (disarmed) before he realizes it.  I don’t know about the rest of the frogs, but the water is already much too hot for me.

Finally, she staged a sit-in on the House floor to push her agenda to disarm Americans without due process. Depriving people on the “no-fly” list their right to keep and bear arms may sound like a good idea on the surface. Except there is no due process. The government can put anyone on the no-fly list for any reason. Want to disarm a law abiding dissident?  Put him on the no-fly list. Poof! Rights gone.